Toby Keith’s 2012 US Tour is dubbed as the Live in Overdrive tour, which will bring him in key cities all across America, including a one-night only performance at The First Niagara Pavilion, in Burgettstown, PA on July 27, 2012. 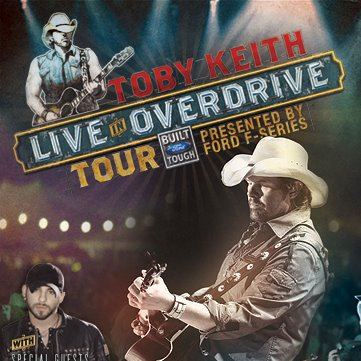 Toby Keith is one of the industry’s most versatile talents.  He is endowed with skills that can take him in front of the spotlight, as well as a knack for building a name for himself ‘behind-the-scenes’, so to speak.  He is popularly known as a country music singer-songwriter, recording artist and actor.  Yet, he is also an admired and highly regarded head honcho of his own music label, as well as an entrepreneur who owns a chain of restaurants all over the US.  His midas touch in his numerous ventures earned him a citation from Forbes as one of the top-earning country stars.

Yet his heart and soul truly belongs to music, especially songwriting.  His ever loyal fanbase  has brought him success with memorable hit songs like “How Do You Like Me Now?!” , “Who’s Your Daddy?”, “Beer for My Horses (duet with Willie Nelson)”, “As Good As I Once Was”, and a whole lot more.