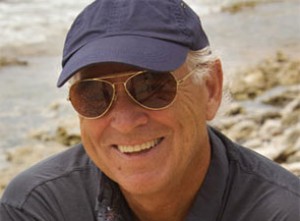 Jimmy Buffett (born December 25, 1946 in Pascagoula, Mississippi, United States) is a singer/songwriter, best known for his “island escapism” lifestyle and music including hits such as “Margaritaville” and “Come Monday”. He has a rabid, but genial, cult following known as “Parrotheads.” They call the youngest members “Parakeets.”

Buffett has written three No. 1 best sellers. Tales from Margaritaville and Where Is Joe Merchant? both spent over seven months on the New York Times Best Seller fiction list. His book A Pirate Looks At Fifty went straight to No. 1 on the New York Times Bestseller non-fiction list, making him one of seven authors in that list’s history to have reached No. 1 on both the fiction and non-fiction lists. The other six authors who have accomplished this are Ernest Hemingway, John Steinbeck, William Styron, Irving Wallace, Dr. Seuss and Mitch Albom. He also co-wrote two children’s books, Jolly Mon and Trouble Dolls, with his eldest daughter, Savannah Jane Buffett.